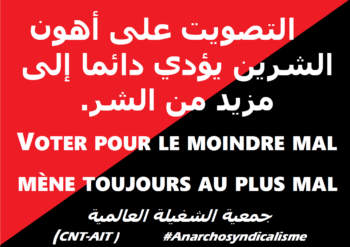 The Arab Spring: failed revolutions and a successful transfer of power

From our friends of Tunisian Anarchist Union, translated by our compañeros of ASF-IWA Australia :
The Arab Spring: failed revolutions and a successful transfer of power

It seems as if there is a predetermined pattern or a pre-equipped program for all the so-called (Arab Spring revolutions), demonstrations against a corrupt and decaying old authority, suppressed by the regime’s police forces, the army intervenes to stop the repression after a while and declares itself a neutral force outside the regime and rule among the political forces The Salafis were used as a scarecrow to frighten the liberal forces, handing power to the right wing of the regime represented in the moderate political Islam (the Brotherhood) for a while, and then transferring power to other wings of the former regime, wings that did not emerge in the first rows of it, the above.

Formelly speaking, this is almost a full success !

What happened in all the Arab Spring revolutions, with different differences imposed by the local circumstances of each state, the Islamists always enter the line, always end up handing over power to the former regime, the army always plays the role of neutral government, and the revolutionary movement always ends in a worse economic and political situation.

On the political front, liberals like to call these revolutions failures, while the traditional left atributes those failures to external conspiracies against [sovereignty and] national regimes. All this shows us on the contrary that those Revolutions have succeeded in fulfilling their mission.

We can, of course, justify and explain this view

But let’s start by defining the pattern of movement of these revolutions from within: